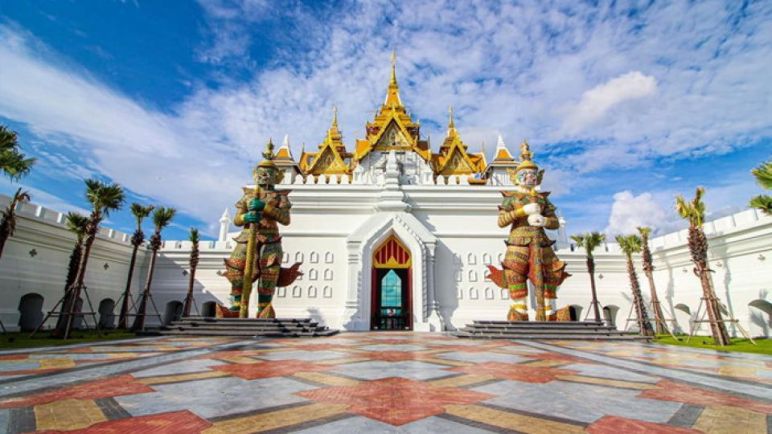 What is not mentioned in the whitepaper: Meanwhile the park is closed. Do you want your money back? https://www.bangkokpost.com/business/1867924/theme-park-legend-siam-closes-no-tourists

… and why it is not a real estate tokenization, but the tokenization of corporate rights under Hong Kong legislation from a minority shareholding in a Thai business that owns real estate. Sounds complicated – for a reason. 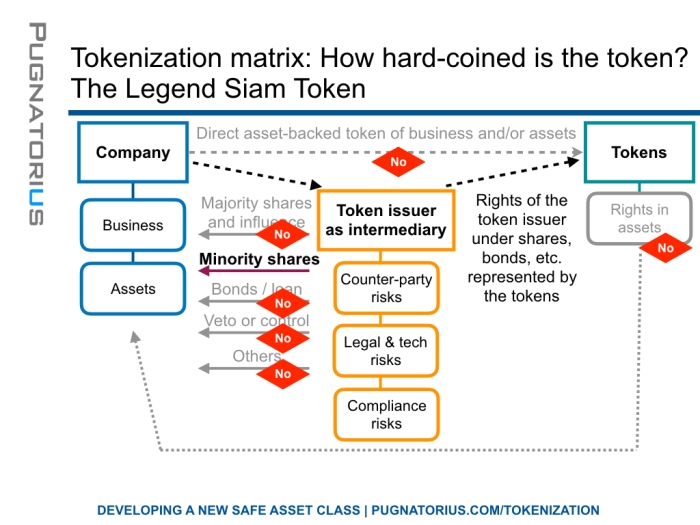 Legend Siam Theme Park is a Disneyland-like hospitality venture in Pattaya, Thailand’s infamous holiday destination. The family-friendly amusement park allows international visitors to experience Thai culture and symbolism without the need and hassle to travel to the original locations. This is especially inviting for visitors which mainly need pictures for their social media profiles instead of a real Thailand experience.

Legend Siam is spread over 10,000 square meters and features three zones: Siam Vilize showcases civilization of Siam, Araya Thai representing Thai traditions and culture, and Bhumi Pan Din wisdom portrays the pride of Thailand. More information about a special show titled “The Echoes of Legend Siam”, Miss Grand Thailand’s “Legend Siam Culture Fashion Show” and other performances can be found on the Legend Siam website.
The business venture is not linked to crypto, blockchain or other digital asset business technology. Just a start-up with the typical small likelihood of sustainable success. 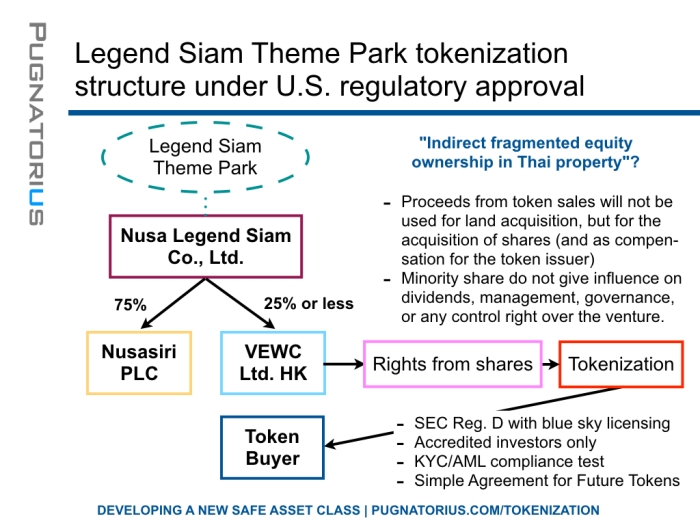 THE GREAT TOKENIZATION SWINDLE: The private key in a token does NOT grant ownership in the real world asset. Token transfers do NOT transfer ownership in the underlying assets. #tokenduediligence gives clarity on rights & risks. #tokenizationswindlehttps://t.co/eHXP6wcRDd

Up to 25% of the shares will be acquired and held by Via East West Capital Ltd., a Hong Kong-based company, incorporated in 2019 with a registered capital of roughly THB 400 million. It sees itself as a Pooled Investment Fund and has an investment management business about investing, managing real asset investment and tokenized asset investment in Southeast Asia. As a side note, the tokenization project has not been mentioned in the official SEC announcement dated September 12, 2019.

The Hong Kong company has as a minority no influence on the management of the project. The minority shares have no voting rights at all. Any token rights derived from this, have the same or fewer rights and influence. The token buyer is neither owner of the amusement park, nor shareholder, nor is the management of the amusement park obligated to any information, reporting, disclosure vis-a-vis one or all token buyers.

The Hong Kong company offers one million Legend Siam Tokens (“LST”), representing its up to 25% minority shares in the Thai company, under an “Exempt Offering of Securities under SEC Form D.” (Reg. D guidelines under the U.S. SEC). The investment is (misleadingly) promoted as an “indirect fragmented equity ownership stake in (Thai) property.” Token buyers have to be accredited investors under U.S. regulations and pass a comprehensive KYC/AML compliance test.

Legend Siam Token investor’s considerations: If the token does not perform, there is neither recourse in any real estate, nor to any Thai business nor even the shares

The investment opportunity is not listed at one of Thailand’s ICO portals. No Thai license has been granted or even applied for. No Thai language version exists on the website “The first large-scale cultural theme park curated by Via East West Capital.” However, it is possible to directly access the website from Thailand and to download with paper, pitch deck and offering memorandum. And, obviously, an indirect Thai investment has its particular attractiveness for investors that are resident in the Land of Smile.

If the Legend Siam Token would be qualified as a real estate token or property-backed token, Thailand’s SEC would apply its SEC-Act or its Digital Asset Business Decree to the STO. This should mean that the STO is seen as unlicensed and illegal in Thailand. Such risk is pretty vague described in the offering memorandum as “The regulatory regime governing blockchain technologies, cryptocurrencies, tokens and token offerings such as our Tokens is uncertain, …”

However, the proceeds from the token sale are not really used to acquire land. The tokens do not represent any real estate, any rent payments, the land value or other characteristics of fractional land ownership. Instead, the proceeds are used to acquire a minority shareholding. As a result, the tokens do not provide any rights and claims that go beyond the acquisition of a (tiny) part of a (tiny) minority share. It is not a real estate token, but a project-based token in a Hong Kong company that holds shares in a Thai company which runs an amusement park. Neither the single token buyer nor all token buyers combined not token buyers and token issuer combined have any influence whether any profit will be distributed at any time.

The risk profile of the token investment is at least interesting: The tokens represent (i) the economic risk of the amusement park, (ii) multiplied with the business risk as a minority shareholder without management” without any voting right, without profit distribution influence, (iii) multiplied with the business risks of the token issuer and all its unknown future business ventures, (iv) multiplied with the standard tokenization risks. The tokenization bases on a valuation of the amusement park of US$ 200 million. The token buyer should deem this amount, divided by the overall risk profile, as reasonable value, to rectify his investment. He should consider the significant simpler risk profile of directly acquiring shares in the theme park company – even this is not on offer now. 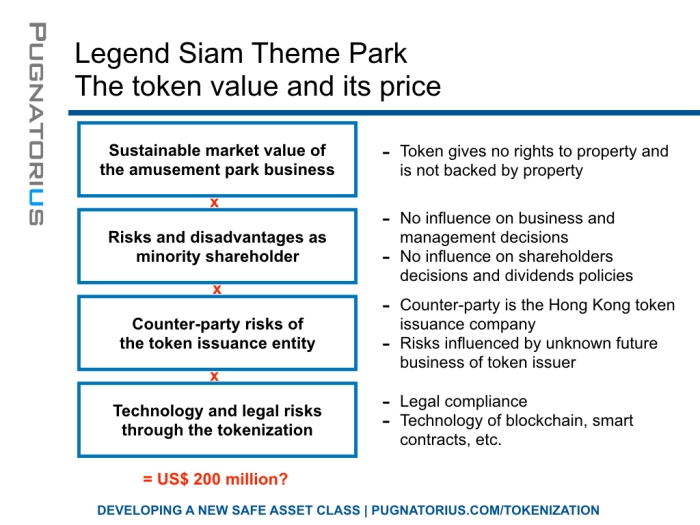 Tokenization grants derived rights over an asset under a complex contractual and regulatory framework. The token does not stand for legal or economic ownership of the asset and the transfer of the token does not transfer the asset. The token holder bears the trustee’s counterparty risk on the asset. The asset may be confiscated or its ownership generally declared illegal. The rights of the token holder may be withdrawn if the acquisition was made illegally, for example, in violation of an embargo or by a blacklisted seller. The asset owner may be prohibited by the government from surrendering the asset to the token holder. Do your own research in a tokenization due diligence.

This article is for educational purposes only. It is neither legal nor investment advice. Justinian Lawyers Thailand Delegation is in no way involved in the venture and not linked to any of its participants. More regarding the Bangkok law firm’s crypto and fintech practice at “Legal advice, tax structuring, transaction support services, and business matchmaking on FinTech, cryptocurrency, digital asset ventures, and financial services“.

Justinian Lawyers Thailand Delegation together with its logo constitutes since 2015 the sidekick brand name of the Bangkok investment law firm and is meanwhile protected for legal services by Thai trademark laws. The formal registration is still pending, but has a retroactive effect.